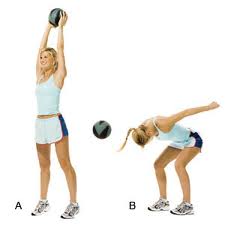 The Med Ball Slam is another explosive exercise I like to implement in programs I design.

It’s a great way to improve your ability to hit effective snap downs in a match.

Take a look at the exercise. See what I mean?

As you can see, the Med Ball Slam is about as close to mimicking a snap down as you can get. Simulating speed and direction of movement are 2 great ways to ensure optimal transfer to the mat.

Start by holding a Med Ball while standing. Your arms should be relatively straight so the Med Ball is near your hips.

The counter-movement is the opposite of any of the other exercises detailed in this series of posts. To start, you’ll explode up into your triple extension position. The ball should be over your head. Your arms should still be relatively straight.

Once you’ve reached the top, redirect your efforts toward the ground as quickly as possible.

Release the Med Ball as you reach the bottom of your downward movement.

Your knees should be slightly bent and the ball should release somewhere around your chest.

Technique Tip: Avoid “overslamming” the ball. Specifically, I mean leaning over and releasing it later in the movement. This can result in the ball bouncing back up and hitting you in the face.

Additionally, regarding better transfer to wrestling, the more power you can produce from a shorter range of motion, the better. This will not only help you to react quicker on the mat, but you’ll also be in better position to make your next move.

Granted, that’s usually over the course of many years and in a greater range of motion.

Regardless, err on the side of caution when it comes to this exercise. Go with a lighter Ball if you have a choice, especially if you feel like a heavier one is agitating your shoulders. The last thing wrestlers need is more unnecessary stress on their shoulders!

On top of that, don’t lose focus of what’s actually doing the work- your hips and core.

Re-watch the video of me performing the MB Slam. Pay attention to the work my hips are doing. Also take note of the range of motion in my shoulders.

For the next post in this power training series check out- Single Leg Bench Jump.

To read the first post in the series check out- Weight Training For Wrestling.