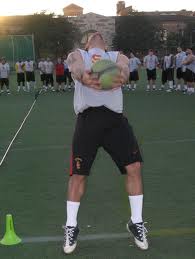 The Med Ball Toss is the first Speed-Strength exercise in the Weight Training For Wrestling series.

Speed-Strength exercises are oftentimes referred to as plyometrics. They typically utilize your bodyweight or light Medicine Balls to provide resistance.

Proper implementation and progression of Speed-Strength exercises into your weight training for wrestling plan will benefit you in a number of ways.

Much like the other exercises in this series, I like the Med Ball Toss because it’s super easy to learn and implement into your training program.

The MB Toss is obviously a fairly easy exercise to perform. So, rather than go into the technique points (basically grab a ball and throw it as high as you can), I’ll instead cover a couple of important keys to maximizing your results with this exercise.

The first thing I like to do with the Med Ball Toss is to find some way to measure it. That way I know how the wrestlers I train are progressing.

We’re fortunate at my gym to have nice area in the back of the building for various throws (as seen in the video above). On top of that, there’s some kind of power cable running between the two buildings that’s about 20-feet off the ground.

So we use that as a “measuring stick.” The goal is to toss the ball over the cable.

Once a wrestler is able to consistently throw a certain size Med Ball over the wire, I’ll have him move up to the next size. Depending on the ball it will be either a 2, 3, or 5 pound jump.

The second key to maximizing your power output with the Med Ball Toss is to cut down on the time it takes you to perform your counter-movement.

When you first start performing this exercise take your time and get a good feel for dropping down with the Med Ball.

However, once you get comfortable with getting into the Power Position, start to focus on getting there faster. This is really going to help your hip speed on the mat.

So for the Med Ball Toss, or any of the other explosive exercises being detailed in this series, always do your best to cut down on the execution time once you’re proficient with the technique.

For the next post in this series check out: Training For Wrestling- Box Jump.

To read the first post in the series check out: Weight Training For Wrestling.