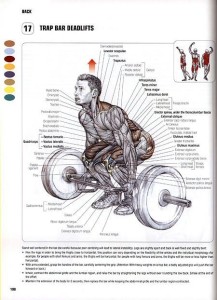 The deadlift is one of the best overall strength exercises you can perform. It builds unbelievable hip extension strength, core stability, and grip.

And while the barbell version is the most common, I prefer the Trap Bar when working with wrestlers.

The primary reason I prefer the Trap Bar is because I feel it’s a safer version. Because of the design, the weight in line with your center of mass. By putting you in a more efficient lifting position, your chances of a back injury are lower.

I know, in a match you’re not always in the most efficient position. Because of that, it would make sense to build strength at these angles.

And while I do use exercises that put you in less than advantageous positions, I don’t like to do that when deadlifting. This is primarily because you can use a lot more weight with this exercise then an exercise like a Good Morning.

Here’s a video of me demonstrating the Trap Bar Deadlift:

Make sure to pause at the bottom of each rep. This allows you the opportunity to get back into a proper pulling position.

Additionally, that’s what makes a deadlift a deadlift. It’s called a “deadlift” because you lift the weight from a dead stop.

Here’s a video of a heavy Trap Bar Deadlift:

As you can see, with heavier weights, a breakdown in technique can occur.

Without getting into too much detail, I always suggest wearing a belt when you start lifting above 80-85%. I’ve gone back and forth on this for a while, and here’s my final conclusion:

Ultimately, the belt will help reduce the risk of injury. The last thing you want to do is injure yourself, especially in a controlled environment like the gym. You can’t progress as quickly when you’re hurt.

For a long time I considered the fact that belts aren’t worn when you wrestle, and because of that, I was against using them.

However, it’s important to keep in mind why you lift for wrestling. It’s to become a better wrestler. And, when you’re injured, you simply can’t make improvements as fast as when you’re healthy and training regularly.

Want to see why and how I program the Trap Bar Deadlift? Read Lifting Programs for Wrestlers.