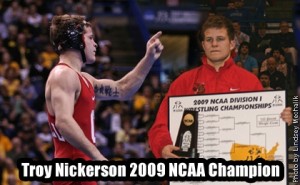 Here’s an interview I did with Olympic hopeful, Troy Nickerson.

For those of you looking to follow and connect with Troy, check out the following options:

Anyway, on to the good stuff…

College Stats While At Cornell University

Afternoon/Evening– Long cardio workout, usually a 5-7 mile run followed by a sauna session to cool down

Afternoon/Evening– 30 mins worth of intense conditioning, similar to Tuesday

OFF– Sauna for recovery 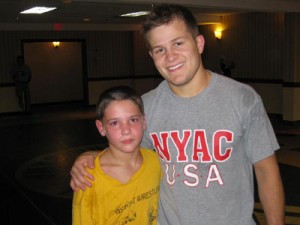 Other Pieces Of The Puzzle:

During the week, I have a meeting with a nutritionist. We usually go over my diet, get some body comp numbers, evaluate my previous week of training and make adjustments to the plan as needed.

In addition, I meet with a sports psychologist depending on my training situation. This isn’t as regular as the nutritionist due to my schedule.

I also watch film for probably 4-6 hours per week.

This summer, I did a lot of traveling. I traveled to Belarus on two separate occasions, as well as Ukraine, Poland, Turkey, Armenia, Chechnya (Russia), and Germany. I’m thankful to have a few months back in the USA!

Finally, check out this awesome video interview Clinch Gear did with Troy Nickerson:

How I Tried To Ruin Troy Nickerson’s Christmas!