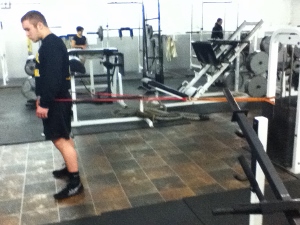 So, I thought I’d cite a journal article I found regarding the topic. I will then go into what I’ve found as far as speed and force production while using the Tendo Unit.

To start, here’s a summary of the article.

Summary- “Resistance bands are used to improve explosive power in strength training athletes. Further, these bands are adaptable enough to provide resistance during drills for sport-specific training in wrestling. This article introduces the use of resistance bands to improve explosive power during the initial phase of the takedown and escapes from the bottom position in Folkstyle wrestling. Coaches from other styles of wrestling can benefit by using resistance bands and the ideas found in this article to design drills to meet the demands of other grappling sports.”

It has been shown that sport-specific training is crucial for success. Wrestling is no different. Therefore, identifying and programming the correct exercises that most mimic the neuromuscular demands is of the utmost importance.

Because of this, many coaches and wrestlers have started using bands to provide resistance when shooting. Therefore, the purpose of this article is to discuss ways to use resistance bands to improve power in 2 key positions. Specifically, the authors examined leg attacks and stand ups.

Adding resistance bands has been shown in research (which I also cite in this post) to enhance the development of explosive power during strength training movements.

Based on that research, the authors propose in this journal article that similar benefits can be realized when used for specific skill development. In this case, shooting a leg attack.

The band studies cited are specific to lifting which included a periodized strength training program. So this data extrapolation is hypothetical in nature.

Anyway, the authors use a band/sled combination for this article. Here’s what they say in regards to choosing proper band resistance and sled weight:

“A proper band weight allows for an initial resistance that impedes the wrestler’s progress but also allows for some movement during the level change of the takedown. An ideal sled weight is one that challenges the wrestler to move at maximum speed and requires use of the large muscles of the hips and legs.”

The authors caution that using too much band tension may lead to shorter steps when shooting. This could ultimately lead to developing different movement patterns. This is something I’ve written about before as well- The Missing Link To Your Program.

Therefore, the authors suggest starting with lighter weights to get a feel for the appropriate footwork. Once confidence and control are displayed with the setup, then look to progress. Again, like any power exercise- focus on choosing a resistance that allows you to produce maximal power and acceleration. Avoid using too much weight. This will slow you down.

As far as how to implement this exercise, the authors suggest it should be individually specific. For example, if you show a lack of power to complete takedowns late in the match, then perform these at the end of practice.

Look to perform 3 to 5 reps. Make sure to adequately rest in between. The authors cite research suggesting 20 seconds between each rep. However, be the judge based on how you feel each rep goes. The key is to be as explosive as possible, so make sure you maintain that quality.

If you don’t have a sled to attach the band to, a partner can also hold the other end of the band.

The focus of the person holding the band is to create adequate tension at the start. This makes it so the wrestler taking the shot needs to overcome a slight amount of initial resistance. Don’t make the band too tight though. This will not simulate the starting power needed in a match situation.

The authors conclude the paper stating that the use of bands offer a number of benefits.

First, it only requires a small group of wrestlers (one shooting, one holding the band, and one being a “dummy” to shoot on). This allows for rest in between each set. Optimal recovery will better ensure a higher quality effort for each wrestler. Adequate rest is a must when it comes to successfully implementing a power program.

Second, it allows the wrestler to be maximally explosive without risking injury to a partner.

“These drills are a safer alternative that can help stimulate the desired intensity without increasing the risk to partners trying to create the appropriate drill resistance.”

First off, the coolest thing about this paper is that the co-contributor, Tom Voorhis, has not only been a client of mine, but also was a long-time member of Ironworks Gym. So I was pretty excited to see that he was involved.

Now, on to my findings using the Tendo Unit (albeit with 2 wrestlers).

I didn’t use the same setup they mentioned in this paper. I anchored the bands to a bolted down machine. I didn’t use a sled.

Here’s the picture again to give you an idea of the setup.

Here’s what I found:

None of the shots with the band produced a higher Peak Power or Peak Velocity than the average Peak Power or Velocity of all shots taken for the wrestlers I’ve tested.

What I found after the first 6-weeks of testing suggests that training with exercises that produce higher Peak Power and Velocity outputs will result in higher outputs when shooting a leg attack.

So, using band resistance while performing a leg attack is not something that stands up to what I’ve found. Granted this is from only 3 months of research. This is not much in the grand scheme of things.

***On a side note- I’m not trying to underplay what I’m doing. I’m just trying to make you aware that while what I’m doing is unique, it’s still in the very early stages. I don’t advise anyone to completely revamp their training based on 3 months of data.

Anyway, when I measured Peak Power and Velocity during a sprint with the bands, things were different.

In the case of one wrestler, the Peak Power produced during the sprint was 13.8% higher and the Peak Velocity produced was 14% higher.

The other wrestler had less exciting results, but again, this was a quick “test” I did. His Peak Power produced during the sprint was 5.2% higher and his Peak Velocity was 1.5% higher.

One thing that may explain this is the band tension used. I used the same bands for both wrestlers. However, the one who produced the higher percentages has much stronger legs. Therefore, the band used provided a lot less resistance compared to the wrestler with weaker legs.

So while not as impressive as the results from the other wrestler, it still falls within the exercise selection that produces higher power and/or velocity outputs. Additionally, like I mentioned, it must be taken into consideration that band tension wasn’t adjusted for leg strength.

Shooting with bands is gaining popularity, and why not? It takes a sport-specific movement and adds band tension, which has been shown in research to increase strength.

However, based on what little data I have, I’d say that greater improvements in both shot speed and power would be realized by a short sprint (2-3 steps) with band tension.

Anyway, what are your thoughts on this? Do you shoot with bands regularly? Will this change what you do?

Let me know by commenting below or emailing me at dickie@wrestler-power.com.