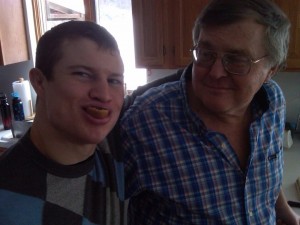 With Christmas right around the corner, I thought I’d share this classic photo from last year of my Dad and me.

I had a comment left with a few questions on some of the exercises in the 4-week program I recently emailed my subscribers.

On a quick side note- I’ll always take whatever time is necessary to fully address any questions you may have. However, if a thorough post is needed to answer things, I’ll need about a week to get it together.

But I promise I’ll always respond to your comments within a couple days (usually) with at least some info.

Alright, on to the exercises in question.

First off, the reason I call these Plyo Pushups rather than Clap Pushups is because I am looking for maximum vertical displacement. When I first started, I called them Clap Pushups, but the wrestlers I train wouldn’t maximally explode off the ground (or bench). Instead they would do just enough to clap their hands.

So rather than think about clapping, simply focus on exploding up as high as possible. This is ultimately what the exercise was first designed for anyway.

To perform it start by getting into a pushup position with your hands on a bench.

From there lower yourself until you either touch your chest or it’s very close to touching. Then drive yourself back up as explosively as possible. Try to get your hands as far away from the bench as possible.

In fact, a good goal for this exercise is to be able to push yourself back up to a standing position.

Additionally, once you get a good feel for the exercise, don’t worry about whether or not your chest touches. Rather, focus on lowering quickly, catching yourself, and then redirecting back up as explosively as possible.

Vertical power is built with most of the explosive power exercises you may be familiar with (Clean variations, Snatch variations, vertical jumps, etc). However, developing horizontal power for wrestling is more important.

Are you traveling up or forward?

Developing horizontal power is a great way to increase the speed of your shots and escapes. This is why I really like Bench Horizontal Jumps and other horizontal jumping variations.

Start by clearing a lane for you to jump in. Set up a bench or a box at one end of the lane.

From there sit on the bench and pause for a second or two. Then jump out as far as possible.

You don’t need to stick the landing, but try to land in an athletic stance. This will help prepare you for the latter progressions of this jump.

I’m planning on writing a post in the next few weeks about why the Kneeling Jump is one of the best exercises you can do for wrestling. It’s especially helpful if you’re looking to develop and maximize the explosive power in your hips.

The Kneeling Jump may seem awkward at first because you’ve probably never isolated your hips to produce power before. Instead, you usually use your legs with your hips (jumps, Cleans, etc). However, after a couple weeks you should get a good feel for it.

Start by getting on your knees. The wider your knees are the easier the jump is.

Additionally, keep the tops of your feet flat against the ground rather than digging your toes in. I’ve found most wrestlers have the tendency to simply rock back and stand up if their toes are dug into the ground.

The Cuban Press is supersetted with the Bench Press for two reasons.

First, it’s a great shoulder health exercise. With regular use, it should help keep your shoulders resistant to injury.

Second, it’s not very demanding. This makes it a great way to get extra work in without fatiguing you between heavy sets of Bench.

It’s a difficult exercise to explain, so watch the video a few times if you’re having trouble.

As far as tips go- don’t worry about moving up in weight with the Cuban Press. It’s simply a shoulder health exercise, not a heavy-duty strength exercise.

Also, be very systematic with your technique and focus on getting maximal range of motion on the rotational portions. Additionally, make sure to keep your triceps parallel to the floor as you perform the rotation.

The DB Snatch is a great, easy-to-learn exercise for developing explosive legs and hips. Additionally, it improves stability in the shoulders and core. This makes you more injury resistant in these two areas.

When you first start focus more on rhythm rather than exploding up like I show in the video.

However, once you have a good feel, you should start to increase the weight. Going heavier in this exercise will help you to use your legs/hips better. This is especially helpful if you find that you’re pulling the weight with your upper body rather than popping it up with your lower body.

Start by taking an athletic stance and holding a dumbbell between your legs. Depending on the size of the dumbbell, you may need to widen your stance a little more.

Don’t worry if you have to do this. In wrestling, you have to produce vertical power from a wide stance from time to time anyway. 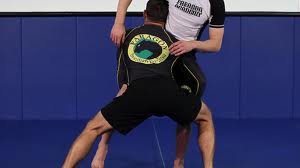 From there drive your hips back and get into your power position.

Once you have reached your power position, drive your hips forward in an effort to explode as high off the ground as possible. Use the power generated to direct the dumbbell over your head in one explosive, fluent movement.

At no time should you feel like you’re using your upper body to lift the dumbbell overhead. If you are, lower the weight.

Ultimately your weight selection will come with practice.

If you go too light, you may feel as though if you release the dumbbell at the top that it will continue to travel up. This may lead to some excessive strain on your shoulder, so you’ll want to go heavier.

If you go too heavy you may notice you have to use your upper body to lock the DB out overhead. Or you may notice your stance widens during your explosive effort. Both are signs that you should lower the weight.

So while there are some small intricacies to the DB Snatch regarding weight selection, once you get a feel for it, you’ll notice a nice increase in the power you’re able to produce on the mat.

The Split Squat is the first exercise I have wrestlers start with as part of the Single Leg Progression I use.

Simply take a staggered stance as shown in the video and lower your back knee until it lightly touches the ground. Once your knee lightly touches, drive back up to a standing position.

While performing the Split Squat focus on the following:

1. Keep your front foot flat throughout the exercise.

2. Touch your back knee to the ground. I really push for touching the back knee because it produces consistency.

For example, have you ever been to the gym and watched someone squat? Very often you’ll see low squats during the warm-up sets. However, as the weight gets heavier the person will stop going as low.

Are they really getting stronger or are the just moving a heavier weight through a shorter range of motion?

It’s important to know that you’re getting stronger. I mean, that’s why you’re lifting, right?

3. LIGHTLY touch the knee. Don’t destroy your knees in the weight room. If your knee is hitting the ground too hard, lower the weight and focus on using better control.

At the end of the program I include a range of total reps to be performed with both chin-ups and dips. These are meant to be done in as few sets as possible.

Ultimately your goal from week to week is to perform more total reps in the same number of sets that you did last week. Another goal to shoot for is to perform the same total number of chin-ups or dips in fewer sets than the week before.

Relative (pound for pound) strength is an important component to any sport with weight classes. So having a way to measure and track your relative strength is a must for wrestling.

Think about the best wrestlers in the country. I can bet that the great majority, if not all of them, have a very high level of relative strength, regardless of their weight class.

Alright, that’ll wrap up this post. I hope it helps clear up any confusion.

Again, I will always hyper-link exercises in the programs I send out. But if you need further clarification, just leave me a comment and I’ll put together something that’s more detailed.