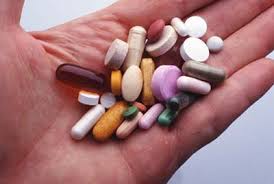 Claim- “Fish oils contain the long-chain omega-3 fatty acids eicosapentaenoic acid (EPA) and docosahexaenoic acid (DHA), both of which are claimed to have a variety of health benefits, including the reduction of inflammation.”

Research Findings- Many research studies show that when consuming a standard, Western diet, that an imbalance between omega-3s and omega-6s is very likely to occur. Some, but not all, researchers believe there is adequate data to suggest that increasing EPA/DHA intake by as little as 1-2 grams/day can improve immune function. Additionally, low-calorie diets (common in wrestlers making weight) tend to be low in DHA/EPA. Therefore, it is suggested that increasing fish oil consumption can improve health during the weight cutting period.

Claim- “Quercetin is a dietary flavonoid present in a variety of fruits and vegetables, including apples and onion skin. Claimed to have antifivral activity and reduce the risk of upper respiratory tract infections (URTIs).”

Research Finding- There seems to be a lot of evidence that suggests Quercetin may be effective in healing wounds. However, data is limited in regards to the supplement and it’s role in URTIs in athletes.

Claim- In general, honey has antibacterial properties. This particular type of honey (from the Manuka bush) is claimed to be the most potent when it comes to its antibacterial nature.

Research Findings- While there is a lot of evidence that shows this honey may be effective when it comes to healing wounds, there is limited data on whether or not it can reduce/eliminate the risk of URTI in athletes.

Claim- BC is the first milk produced from cows after they give birth. It is shown to be high in immune, growth, and antimicrobial factors. As a result, many athletes ingest BC under the belief that they will benefit from these factors.

Research Findings- “Growing evidence that 10-25 grams/day of BC given for 4-5 weeks may have positive effects on the immune system and reduce the risk of URTI, although many of these studies require further large-scale clinical trials.”

Claim- Echinacea is a herb that contains bioactive compounds that are claimed to have positive effects on the immune system. It is commonly taken by athletes with the belief that there will be a decreased risk of URTIs.

Research Findings- “Anecdotally, many athletes report reduced incidence of URTIs when using it, and there is some scientific support for these claims on athletic populations. However, more recent studies have reported no benefits on infection or URTI symptoms. Athletes need to be especially careful using herbal supplements to ensure none of the ingredients are banned by the WADA.”

Claim- Much like a few supplements detailed above, this is believed to decrease the incidence of URTIs. It is derived from the cell wall of yeast, fungi, algae, and oats.

Research Findings- Recent studies have shown that supplementation of beta-glucan results in an increased activity of “natural killer cells” which ultimately leads to a decrease in URTIs. As such, this supplement may be especially useful during intense training/weight loss periods to boost your immune system function, thereby decreasing the risk of URTIs.

Claim- Glutamine is an essential amino acid (which means the body cannot produce it). It is also the most abundant amino acid found in muscle and plasma. Prolonged, intense exercise has been shown to reduce glutamine concentration in the body. Therefore, it is suggested that proper supplementation will increase concentration and result in better/optimal immune function.

Research Findings- “Some evidence in rats suggests that glutamine may help, but feeding studies in humans have generally failed to show any effects on exercise-induced changes in immune cell function. No reported adverse effects, although of modest supplementation (less than 30 grams/day).”