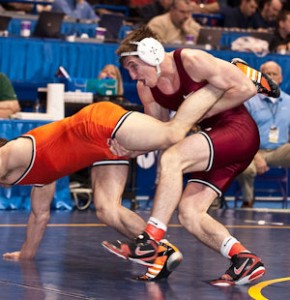 In this next post I will detail Step-Ups and Lunge variations.

I’ve used Step-Ups for a number of years with the wrestlers I train, but not as consistently as Split Squats and Lunge variations.

However, as I thought more about it I saw a definite carryover with the Step-Up to a stand up.

Additionally, because you don’t get as extended with Step-Ups, I’ve found they’re a bit easier to perform. On top of that, there’s little eccentric portion to the exercise so your legs don’t get as sore. This makes it a great exercise to use in an in-season plan!

However, to perform them properly you must keep your core locked even more than with the Split Squat. So it’s a bit of a trade off in terms of difficulty.

As far as technique points go, I like to emphasize a couple of things.

First, as I mentioned above it’s of the utmost importance that your core remains tight and locked throughout the exercise.

Doing so will better ensure that you’ll be able to stay in an “upright and locked position” when you’re in on a shot looking to finish.

The second technique point I like to make goes against what most strength coaches will recommend.

Most coaches are very much opposed to driving off of the foot that’s on the ground. They’ll even go so far as to tell their athletes to dorsiflex their ankle (pull their toes up so they’re standing on their heel) before stepping up to prevent any momentum from being generated by the trail leg.

However, in terms of specificity for wrestling, I think it’s important that you drive off the foot on the ground.

When you shoot a leg attack it’s a transfer of power from your trail leg to your lead leg, right?

The same thing happens during a stand up. You push off of your trail leg as you transfer power to your lead leg to drive yourself up.

Training the body to work as a unit just as it does on the mat is what weight training for wrestling is all about.

So when performing Step-Ups, don’t forget to DRIVE off of the foot that’s on the ground!

Finally, I’ve read a lot on the ideal height you should step to. I always like to approach a question like this by asking- what’s going to have the best carryover to the mat?

Therefore, I think, the height should put your thigh parallel or slightly above parallel to the ground.

I don’t think Step-Ups need too be performed with a deep angle on your hip. The fact of the matter is that if you’re that extended in a wrestling match then you did something wrong and need to improve your technique and timing.

Additionally, when you stand up to get off the bottom you’re hip is rarely below parallel angle.

So, in a nutshell, look to Step-Up to a box or bench that puts the top of your thigh parallel or slightly above parallel to the ground.

I usually have the guys I train perform Step-Ups towards the middle and end of the season. I’ll also rotate them throughout the off-season performing anywhere from 3-4 sets of 5-8 reps.

Lunges, Walking Lunges, and Reverse Lunges are typically the other single leg exercises I use in the programs I design.

I would classify both Walking Lunges and Reverse Lunges as more difficult because they require increased proprioception (joint awareness, balance, etc.). I also think they’re more functional because they train your body to step up and produce force with your trail leg. This mimics how you would have to step in order to finish a takedown or stand up.

So, in terms of the progression to follow in a plan, start with Lunges for a few weeks. Once you’re comfortable, then move on to Walking Lunges and Reverse Lunges.

From this point forward, I’m going to combine Lunges, Walking Lunges, and Reverse Lunges into the term “Lunges.” The technique points are the same, you’ll just be taking different steps for each exercise.

Because of the dynamic nature of the Lunge compared to a Split Squat, the exercise requires much more balance and stability.

As a result, not only will this exercise get you stronger for wrestling, but you will also become much more resistant to injuring your ankle, knee, or hip.

There is an additional bonus of having to actively stabilize your core while performing this exercise. It will help you develop the bracing strength in your core necessary to resist sprawls.

For more on why that’s important read Exercises for Wrestlers- Core Strength and Stability.

As far as key technique points with the Lunge, there are a couple of new ones to keep in mind. First, the front foot should stay flat and trail knee should lightly touch the ground on each rep.

An additional key focus is to maintain a tight core throughout.

What that means is that when your foot lands, you don’t fall forward at the waist.

Instead, you stay upright.

Here’s what I mean (shown with a Reverse Lunge, but you get the point):

**On a quick side note- while keeping the core tight is important with Split Squats too, it’s much easier to do since you only move up and down. As a result, I rarely see issues when wrestlers perform this exercise.

The 2 videos above show technique breakdowns that indicate a weak core, not necessarily a weak lower body. However, because these two areas are “tied” together, it’s important to keep the weight in check until the weak link in the chain can catch up. This is a great principle to keep in mind when it comes to all weight training. It’s certainly one that I wish my wife had kept in mind…

As you may or may not know, Laura has been a powerlifter for a few years now. She is actually one weigh-in away from hitting her first Elite total (she’s hit more than this total in a meet, but she didn’t make 132 when she did it).

Anyway, one of the things she’s “famous” for is the internal rotation of her knees when squatting. In fact, she developed the nickname “crazy legs” from her training partners because of it.

Well, rather than addressing the situation by recognizing it was a Glute/Glute Medius weakness, she just kind of went with it.

That is, until the weak link in the chain broke…

Ultimately this led to a big time back injury that kept her sidelined for close to 4 months.

She tried a lot of different ways to heal it, and was eventually successful.

However, that time off obviously resulted in a big dip in strength. It took her 6 months of hard training to get back to where she was pre-injury. Thankfully, she’s stronger and smarter than she was before.

But learn from this example and address weaknesses before they get out of hand and lead to a major injury!

Back To The Lunge…

Additionally, the second big technique point I place an emphasis on is taking one big step back to the starting position.

A “stutter step” will happen as a wrestler starts getting fatigued and/or is using a weight that is too heavy. Both indicate that an adjustment needs to be made.

By “stutter step” I mean taking more than one smooth step up to complete the rep.

This is almost always accompanied by the trail knee hitting the ground with more force than usual. It also tends to be more common with Lunges than Reverse Lunges.

Being aware of these two things will help keep you from using weights that you shouldn’t be. It will also help you get the maximal overall benefit from all three Lunge variations.

Usually, I’ll have them perform anywhere from 3-4 sets of 4-8 reps as an accessory exercise.

Although I’ve used Lunge variations with higher reps before, I’ve found that they are very difficult to perform for more than 8 reps.

So while I’ll use higher reps for the Single Leg Press and upwards to 10 reps each leg with the Split Squat, I really like to keep the reps at 8 and below each leg for Step-Ups and Lunge variations.

For other posts on developing single leg strength for wrestling be sure to check out: