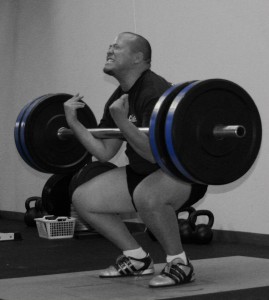 This post begins the exercise descriptions portion of the In-Season series. In this series I’ll detail some of the exercises that I included in an early in-season lifting program for a college wrestler I train via email.

Wrestling Training- In-Season Power Development is the original post. In it I detail some of the principles I feel are valuable to follow during the season.

Here’s part of the program I’ll be referring to.

The Zercher Squat is simply a free squat performed with the bar held in your elbows. It doesn’t take a genius to see how this carries over to the strength needed to finish more leg attacks.

One issue you may run into is if you don’t have access to a fat bar. You may notice that as you begin to work up in weight a standard bar may dig into your biceps causing discomfort.

While I can’t imagine this will lead to an injury, it may discourage you from working up as heavy as you may like. So, if you don’t have access to a fat bar, use a towel or a squat pad to help minimize any pain in your arms.

There are a couple of key things to keep in mind while performing the Zercher Squat.

First, you want to keep your chest up as much as possible. The Zercher Squat has a very similar feel to a Front Squat in that there is a lot of forward pull. So focus on keeping your core braced and your chest up.

The second thing you’ll need to consider is your range of motion. As with any other squat, your intention should be to get as low as possible. However, because of where the bar is held, you can’t always get as low without the bar hitting your quads.

Just do the best you can. Again, focus on keeping your torso as upright as possible. This will help keep the bar from coming in contact with your legs.

Finally, keep this in mind- most of the time the weak link in the movement is going to be your ability to hold the weight in your arms.

This doesn’t mean that you need to start hitting heavy curls every time you go to the gym (your arms shouldn’t be stronger than your legs).

Just understand that your arms are the limiting factor in this equation. As a result this squat variation isn’t going to cause an overload on your legs as a traditional squat would. So rotate the Zercher Squat in with traditional squats every couple of weeks. It will give your legs a bit of a break while simultaneously challenging you due to the unique demands it places on your body.

Because you’re not going to handle as much weight, this makes the Zercher Squat a great squat variation to perform on days when you feel banged up but were planning on squatting. You could also use the Zercher variation if you wanted to get a squat in a few days before a match but didn’t want to overload your body.

No matter how you plan to work it in to your program, definitely find a way to do it during the season.

To read the next post in the series on some more ways to implement Zercher style lifts into your training plan Zercher Lifts 2.