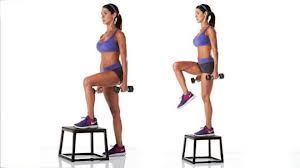 This is the final post in the Wrestling Training series.

In this post I’ll detail the technique for the DB Step Up. I’ll also discuss why it’s an important exercise to incorporate during the season.

To read the original post in this series check out- Wrestling Training- In-Season Power Development. In that post I cover some of my in season weight training principles. I also include a sample week of training from a recent 8-week program I designed for a college wrestler.

Here’s a quick video of me performing the DB Step Up.

You can perform this exercise on a bench or whatever else you have available.

Just avoid stacking stuff. This oftentimes creates an unstable surface that could lead to an injury.

The DB Step Up is a great in season exercise for a number of reasons.

Step Up Benefits For Wrestling

First, it builds unbelievable single leg strength. This is needed to produce faster shots and to get off the bottom more effectively.

Second, it is a great way to maintain a balance of strength between your legs. This is especially important during the season when you’re primarily standing up with one leg and shooting off of one leg.

Because one leg is getting worked more than the other, imbalances can oftentimes develop. Such imbalances can lead to weaknesses, instabilities, and injuries.

Finally, the DB Step Up is a great in season exercise because you don’t get as sore as you would from a lunge variation.

This will allow you to practice harder, compete better, and, as a result, win more.

As you can see in the picture above, there are different ways to perform Step Ups.

Another, way to perform this is to simply hold dumbbells (or kettlebells) in the rack position.

Here’s a video of me performing a DB Rack Lunge. Instead of performing the Lunge, hold the dumbbells as shown in this video and perform a Step Up.

For part 1 in this series check out- Zercher Lifts.