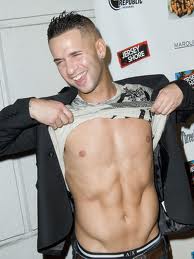 In this post, I will start to detail Day 2 of the program.

To read the original post in the series check out- Wrestling Training- In-Season Power Development. I go into detail the importance of in-season strength maintenance and power development as well as principles to follow.

The Spread Eagle Situp is a great core exercise for wrestlers for a couple of reasons.

First, you can perform them anywhere since no equipment is required. This has been a new focus of the programs I design as I’ve started to realize how basic a lot of gyms are.

Second, this variation of the situp helps to minimize/eliminate hip flexor involvement.

The various muscles that promote hip flexion (psoas, iliacus, and others) are often involved when performing a flexion-type ab movement (pulling the torso toward the legs/hips).

It’s not a huge issue that the hip flexors get involved and are strengthened by various core movements. But, there are certain times when I like to use core exercises that minimize hip flexor involvement. This is especially common when I’m supersetting a core exercise with a power exercise.

Before I get further into this, I want to first clear something up. I often hear “hip flexors” being used to describe hip extension.

It’s basically what coaches and wrestlers are referring to when they say “wrestling is all about hips” or “he is so hard to take down because of his hips.”

Developing strength and power in the muscles that provide hip extension (primarily the glutes and hamstrings) should be one of the primary focuses of your program.

Hip flexors do just the opposite of hip extenders.

In fact, overdeveloped and tight hip flexors actually resist hip extension. This cuts in to your ability to generate hip extension power.

This is exactly why I prefer core exercises that minimize hip flexor involvement when supersetting it with a power exercise. In the case of this program, the superset is a Hang Clean and a Weighted Spread Eagle Situp.

Anyway, here’s a video of me performing the exercise.

The big thing you should focus on is keeping your heels in contact with the ground. This will help keep you from using momentum to complete the reps.

As with any other situp variation, start with your hands across your chest. Once you are comfortable with that, start holding your hands behind your head. Finally, when you’re strong enough you can begin to hold a dumbbell or plate behind your head for extra resistance.

Be sure to check out the next post- Core Exercises 1.